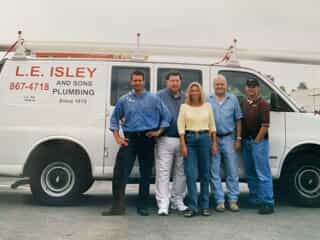 In February 2007, Cherie and Larry Isley turned the reigns of Isley Plumbing over by selling the business to their two sons, Brad and Doug. Brad and Doug Isley would become the fourth generation to run the family owned business.

“You know, you are just really living and working every day,” says Cherie. “During the time Larry and I owned the business we were not only busy with the business but
with the boys playing sports, doing activities, etc., and I was still very involved with Mechanical Skills, Inc. All of the sudden you realize that 20+ years have gone by
and the boys had both graduated college and were entering the business world. It seemed like the right time for the next life chapter.”

After college, Brad and Doug both found their way back to Isley Plumbing and are owners of the business today.

“I hope the boys and our employees saw me as a mentor and someone who wanted the business to grow and thrive,” says Cherie. “Larry had the biggest heart ever and
I know the boys both thought I played “bad cop” to his “good cop” on many occasions but at the end of the day we were just preparing them by showing all sides of the business that are rewarding but not always fun.”

For years, Cherie would get up at 4 a.m. to work as secretary of Mechanical Skills, Inc. from home and then head into Isley Plumbing for a full day. She shares that she loved all aspects of both jobs but the hours and commitment were a lot for a woman trying to balance business and family. She certainly was a role model for many women through the years trying to make it all work and to make a difference – to add value — for the family business.

“The boys are trying to find that work-family-life balance right now,” Cherie shares. “They are both so different and bring varied, yet valuable, skill sets to the business. They complement and respect each other. That is one thing that Larry and I both had for each other as we worked alongside each other growing the business — respect.”

Cherie agrees that a lot has changed since she first walked in the door of Isley Plumbing. She hopes her contributions helped take the business in a positive direction forward and is proud of the impact she and Larry had on the business and even more proud of her two sons who are keeping Isley’s forward momentum going.

“I’ve heard a lot of family-owned companies go under during the third generation of ownership,” Cherie says. “We weren’t going to let that happen on our watch. The bottom line has always been that we want to be your neighborhood plumber, and no one is going to take care of you like we do. That basic philosophy to treat our customers just like family has served us well for a lot of years.”