Many people do not think of the functions that occur in their garbage disposal, unless it stops working, or begins to smell really bad. A garbage disposal smells bad, because food is left in there to rot, and has not been completely broken down when it's thrown in the disposal.

Sometimes foods such as chicken skin or fat, certain meats, and small pieces of bone may get stuck in the garbage disposal, and cannot be broken down.If you haven't used the disposal in a while, or you rarely run it, you may not notice the smell until it gets so bad that it takes over your kitchen.

Once the smell gets very bad it is a turn off for those who have to be in the kitchen, and you may be afraid to dig into the disposal to take out the item causing the smell.

Sometimes there is nothing in there at all causing the smell, sometimes it's something in the pipes that are connected to the garbage disposal. There are ways to get rid of the smell.

What Can A Plumber Do To Get Rid Of It?

You also may need what is called a P-trap; put in place, or it may need replacing, and a plumber can install this, to help keep away bad smells in the future. If the owner takes care of the garbage disposal in the future, the smells should stay away. 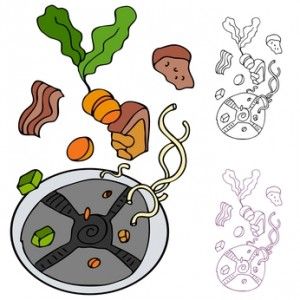 What Shouldn't I Put Into My Disposer?

Certain foods should never be put into a garbage disposal. You never want to put foods in that are too solid, and cannot be broken down such as bones, thick animal fat, animal skin, and anything else that is too hard for the disposal to crush up.

If you put in large pieces of food that are solid as well, you will not be able to pass it through the disposer. Keep the food particles small, and soft, and you can keep your garbage disposal running for a long time without any smells.

Is your garbage disposal clogged and smelling up your Westfield kitchen? No need to wait, Call L.E. Isley at (317) 420-4006 and get the right plumbing services you need.